It shouldn’t happen to man’s best friend, but it does…in my community and in yours.  I can’t think of a crueler punishment for dogs than isolation! I did some traveling this past week, and sadly, I saw them everywhere—dogs  living  in “solitary confinement”, trapped at the end of a chain or in  small pens.   Forcing a companion animal to live outside alone goes against the dog’s two most basic instincts—the needs for a pack and for a safe den.  Don’t kid yourself that dogs “get used to” living outside.

Dogs kept chained suffer great psychological damage.   Lack of socialization and isolation can turn an otherwise friendly, well mannered animal into a neurotic, anxious, unhappy, and often aggressive dog.  They are also easy targets for other animals, humans, and biting insects.   Chaining dogs is a safety hazard for both dogs and humans;  it is not only detrimental to the well being of your animal, it is also dangerous to the public, especially children.

According to Karen Delise, author of Fatal Dog Attacks, chaining a dog is the single most dangerous condition in which to maintain a dog.  She asserts that “statistically, chained dogs are more dangerous than free-roaming packs of dogs.

Chained dogs account for a substantial portion of serious bites.”    The United States Department of Agriculture determined that “continuous confinement of dogs by a tether is inhumane.   A tether significantly restricts the dog’s movement.  A tether can also become tangled around or hooked on some stationary object, further restricting a dog’s movement and potentially causing injury. Chaining dogs also makes them feel vulnerable and increases their aggression.” 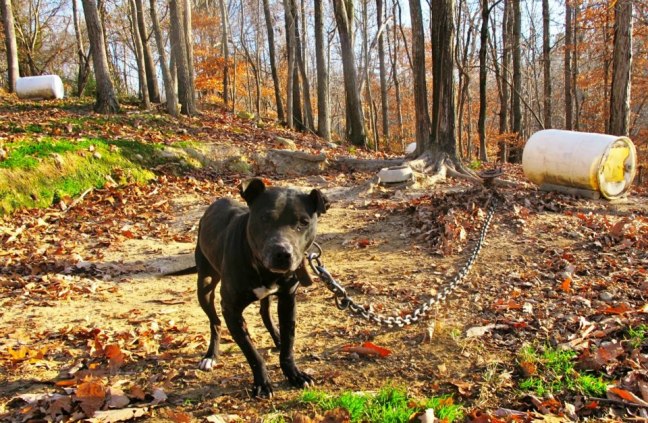 Please  don’t make your dog live on a chain, because it is no life at all, and if you know of dog living this way, get involved.   Your best option is to befriend the dog’s caregivers.  Many people are unaware of the loneliness and deprivation that a chained dog feels, and are decent folks who are willing to do the right thing.  Using anything other than a polite approach will probably make them angry and lessen your chances of helping the dog, but if you avoid being confrontational, you may be pleasantly surprised at the response you get.

Encourage them to find a place indoors for him.  If the dog has housetraining issues, offer training tips and if there are behavior problems, suggest dog obedience classes.  Offer to help build a fence, take the dog for walks, or simply visit the dog regularly.    Fill a kiddie pool with water for the dog to splash around in during the summer, and give him toys such as stuffed  Kongs or Buster Cubes.   Don’t just say, “I feel SO SORRY for that poor dog.”  Anna Sewell emphasizes, “If we see cruelty or wrong that we have the power to stop, and do nothing, we make ourselves sharers in the guilt.”

I wish someone would tell me what I’ve done wrong

To have to stay chained up and left alone so long?

My humans seemed glad to have me when I was just a pup.

There were so many things we’d do while I was growing up.

But now they complain that they “haven’t time” and that “I shed.”

They don’t want me in the house anymore, not even to be fed.

No one ever walks me; they always say, “Not now.”

I’d love to please them; won’t someone show me how?

I wish they would explain why they ever got me, just to leave me on a chain.

-Pauline at the TLC Canine Center

Larsen can be contacted at Paw Prints, Box 373, Newell, Iowa 50568 or by e-mail at plarsen@rconnect.com